In the summer of 1991, Thelma & Louise was a much talked-about movie, sparking a broad public debate about women, men, guns and the fate of women who break the law. A generation later, we could say that this discussion continues on in new forms yet with many of the same debates. Today, the rise of the #MeToo movement has dramatically changed the public conversation about sexual assault and harassment, and popular, consumer, and political culture is increasingly filled with representations of female empowerment. Yet that movement has exposed just how little has changed about the abuse of male power and responses to it. To see Thelma & Louise today is to understand how much gender power relations have changed and, inevitably, the many ways that they have remained the same.

For a generation of women (and men) who constituted its primary audience in the 1990s, Thelma & Louise remains a beloved and influential film, for some even a life-altering one. We should pause to consider how few films achieve this status as a transformative experience for viewers. This can be attributed in part to the film having cracked open a debate about gender power relations and representation well before its time. The power of the film to open up new ways of thinking and living for many of its viewers is also very much about its message of liberation – not simply its depiction of how women are hemmed in by the law, but its representation of the thrill of breaking free from it. The life transformative effect of the film may be one that is particularly strong for women who say it in the early 1990s, for whom it spoke in a new kind of voice to women’s empowerment, their friendships, their relationship to the law, and liberation from gender norms. Thelma & Louise rendered female subjectivity visible in ways that cinema had rarely done before.

In 2018, Jennifer Townsend directed the film Catching Sight of Thelma & Louise, which aims to grapple with the film’s impact 27 years later, in particular for viewers such as herself who felt that it changed their lives. In the year after Thelma & Louise was released, after it made a huge impact on her, Townsend sent out press releases (in a pre-web, pre-social media era) asking viewers to fill out a questionnaire about their response to the film. Many answered questionnaires of left voice mail testimonies for her. Twenty-five years later, by now in her late seventies and never having made a film before, she decided to find the women and men who had filled out the questionnaires and to ask them on film to reflect on how they had felt then and feel now. Many of her interviewees narrate their initial response to the film as a life-altering one, with the film allowing them to see aspects of themselves and their desire on screen for the first time. For some, the true impact of the film was how it revealed the devastation and consequences of sexual violence, as each tells of their own experiences and that of women they knew, who were raped or assaulted and who had no recourse through the law. Thus, the film’s powerful legacy may be in part because it tells the story of sexual violence from the perspective of its victims.

It is remarkable how the film’s style and story do not seem dated. This can be attributed not only to the relevance of its depictions of gender power relations and the law, but also to its deft mix of tones and genres, from light-hearted comedy to action scenes and car chases to complex emotional drama. The kind of genre-mixing that made the film unclassifiable in its time, as a gender-reversal road movie mixed with screwball comedy, buddy film and action film, is much more common in the 2000s, as popular culture has increasingly entered a post-genre era.

The debate over Thelma & Louise revealed that the film touched a nerve not only in its depiction of women breaking free of the law, but also in its depiction of loutish male behaviour, male violence, sexism and misogyny. In her 2018 book Empowered: Popular Feminism and Popular Misogyny, Sarah Banet-Weiser examines how the surge of popular feminist representation, media products, commodities and movements in this era have been shadowed by a rise of virulent misogyny, filled with rage and a sense of victimhood. The popular feminism that Banet-Weiser writes about is networked, circulating through social media channels. This media environment makes the 1991 world of Thelma & Louise debate seem distant by comparison, taking place in newspaper and magazine articles and film reviews, rather than on Facebook and Twitter. Indeed, it is perhaps mostly the changed media landscape that demarcates the 1990s from today. We see this perhaps most conspicuously in the film itself, with the importance of pay phones (and the quarter needed to use them) in the plot. Yet, the attacks on the film’s daring depictions of misogyny, sexual violence and women’s empowerment (calling it a paean to violence that would sway impressionable young viewers to kill) can be seen, sadly, as a precursor to the extreme conflict today of feminism and misogyny.

Social change moves forward and is pushed back with virulence, and moves forward again. That Thelma & Louise, one might say, aged particularly well is both testimony to the power of the film and to the struggle over gender power relations that continues in new extremes today. Let’s keep watching it.
Marita Sturken, Thelma & Louise (‎Bloomsbury/BFI, 2020) ©Marita Sturken 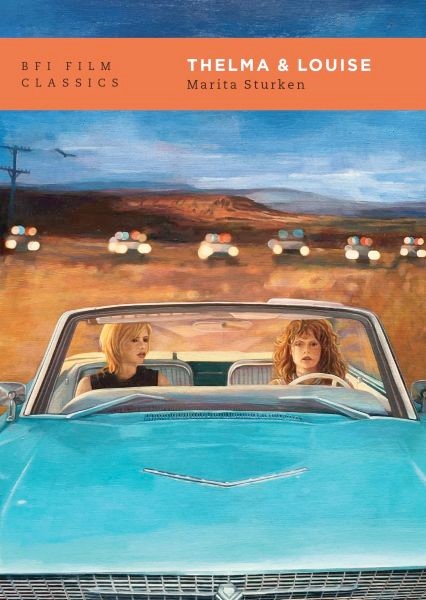