Artistic endeavour too often attracts exaggerated claims. In my research, I attempted to identify films that had genuinely made an impact not merely on the minds of those who watched them, but also on life in the culture from which they had sprung.

Professor Richard Dyer of King’s College, London told me he had considered teaching a course on ‘movies that had changed the world – films where the case seemed pretty strong that they really had had an effect beyond the amorphous drip-drip of lots of films.’ He had quickly isolated Birth of a Nation (1915) and Triumph of the Will (1934): ‘Awful films politically, but wonderful in a certain sense.’ He had considered Eisenstein and the masterpieces that emerged from Russia: ‘But they came after the Revolution.’ Victim seemed to be the only other contender – ‘Which didn’t really give me enough for a course!’ Indisputably, Cathy Come Home, Jeremy Sandford’s play about social welfare, had a devastating effect when it was screened by the BBC in 1966, but it is hard to pin down works for the cinema that influenced British society to the same extent.

Victim’s originator, Janet Green, its producer, Michael Relph, and its director, Basil Dearden, had already used the thriller format to attack racial prejudice in London with Sapphire (1959); whether it contributed in any significant way towards the eventual enactment of the first Race Relations Bill is, however, open to question. J. Lee Thompson’s Yield to the Night (1956) was part of the groundswell against the death penalty, which led to suspension in 1965 and abolition in 1969. Guy Green’s The Angry Silence (1960), written by Bryan Forbes, opened eyes to the injustice of the factory floor, but in terms of effect was ahead of its time. It took ten years, almost to the month, for the principal recommendation of the Wolfenden Report on Homosexual Offences and Prostitution to be enshrined in the Sexual Offences Act 1967; but that Victim helped, even if in a small way, to ease its turbulent trajectory is beyond any doubt.

We know this from a letter composed soon afterwards by the 8th Earl of Arran, who had introduced the Bill and piloted it through the House of Lords. Curiously, Arran had not seen Victim at the time of its release, but finally caught up with it ‘on telly’. He took the opportunity to write to its star, Dirk Bogarde, telling him ‘how much I admire your courage in undertaking this difficult and potentially damaging part’. The swing in popular opinion favouring reform had been from 48 per cent to 63 per cent, and he understood that this was in no small measure due to Victim. ‘It is comforting to think,’ concluded the Earl, ‘that perhaps a million men are no longer living in fear.’ When Bogarde responded, underplaying his own contribution, Arran insisted: ‘We both did our bit.’

Progress has taken its inevitable toll on the social-realist films of the period. By the time of a 1981 screening on television, Radio Times had already decided that Victim looked ‘as dated as a Victorian sex manual’. Yet it still delivers a potent dramatic punch: recent theatrical showings confirm as much. Witness the sequence when a garage door is dragged shut and the protagonist’s wife sees it has been daubed with ‘FARR IS QUEER’. Witness, too, the central sequence, scripted in part by Bogarde himself, when, as the compromised barrister, he declares to her with extraordinary force: ‘I stopped seeing him because I wanted him.’ It was arguably the key moment in the actor’s career, coming two years before The Servant. With that scene he shrugged off the cloak of matinée idol to reveal an actor who both could be, and needed to be, taken seriously. The film’s ‘message’– about the need for society to remove a means of persecuting a specific minority – was one with which he identified fully, but could, for obvious reasons, champion only through a work of fiction. Other leading men had turned down the role; indeed, according to Bogarde, they had ‘backed away like rearing horses in terror at the subject’. He, with more to lose than they, had seized it with relish.

Victim was a landmark not only on his professional path but also in the personal lives of many who went to see the film – among them the director Terence Davies, who speaks of the near-epiphany he had as a teenager at a screening in Liverpool. On a more general level, the background to the production – described at the time by Michael Relph as ‘the most controversial subject ever backed by the Rank Organisation’ – provides a fascinating case history. Janet Green’s papers in the BFI show just how extensive was the collaboration between the filmmakers and the Censor, John Trevelyan, who wielded far greater power than does his equivalent today. As the archives disclose, the team behind Victim gave full weight to their responsibilities.

At the beginning of the film’s 50th anniversary year and the centenary of its director’s birth, a box of four DVDs was released in the United States under the title Basil Dearden’s London Underground. The reviewers were united in singling out Victim as the highlight of the set: ‘bold’; ‘provocative’; ‘a startling social treatise on an outdated law … and an effective whodunit’; ‘much more than a historical curio. Its anger still resonates.’ Once, America rejected it as unpalatable. Half a century later, Victim’s status is far more secure for it is a film that did truly make a difference.
Extracted from Victim by John Coldstream (BFI Film Classics, 2011).
Reproduced by kind permission of Bloomsbury Publishing. ©John Coldstream

A contemporary review
In a time-honoured tradition, Victim uses the framework of a thriller – and rather a good one – to investigate a social problem. The only innovation is the problem itself: for the first time, a British picture concerns itself largely with the lives and problems of homosexuals. Understandably its plot deals with blackmail; and the film unequivocally condemns the way this is encouraged by the present state of the law. An elaborate blackmail racket is described, leading to the death of a young man, until a barrister friend of the dead youth hunts down the blackmailers and gives evidence against them, at the cost of probably wrecking his own career. His investigations allow for a tour of the more respectable parts of the London homosexual underworld, with glimpses of the ways in which different men cope with or are destroyed by their abnormality.

Basil Dearden’s journalistic method works well in these circumstances. With reservations about Sylvia Syms’ portrayal of a judge’s daughter, one can give his casting and control of actors high praise. Among the relatively unfamiliar players, one notes Peter McEnery, Donald Churchill, and particularly Derren Nesbitt, giving a striking presence to the blackmailers’ courier; of the older supporting actors, Hilton Edwards, Charles Lloyd Pack and Norman Bird impress in varying homosexual roles. Dirk Bogarde offers one of his best performances as the barrister, wavering between guilt and resolution. But with this character the script inevitably compromises: he is homosexual only by inclination, never by act. Yet even such equivocation is a big step towards candour, and casting a star in such a part demands courage.

The half-world through which the action moves is portrayed with deliberate tact: there is none of the actors’ camp talk or behaviour which would repel or bewilder most audiences; many an everyday British comedy contains far more risqué jokes; physical relationships are never more than obliquely implied. In short, with the tragedies of death or ruined lives on one hand, and sadism and blackmail on the other, the emotional argument is heavily weighted.

It is easy to sneer that Aunt Edna will have no trouble in being high-mindedly tolerant here. But allowing for public opinion – even after the Wolfenden plea for tolerance, which is not mentioned here – and allowing for industry attitudes and for censorship, could Victim in fact have been more frank than it is? It is only fair to say that it could not. As far as those who made it are concerned, the challenge to their skill and integrity has, for the Britain of 1961, been successfully met. The tougher challenge will come when the case is put with less sympathetic characters in unflattering circumstances, and still presented convincingly.
Terence Kelly, Sight and Sound, Autumn 1961

Victim by John Coldstream is available to buy from the BFI Shop: https://shop.bfi.org.uk/victim-bfi-film-classics.html 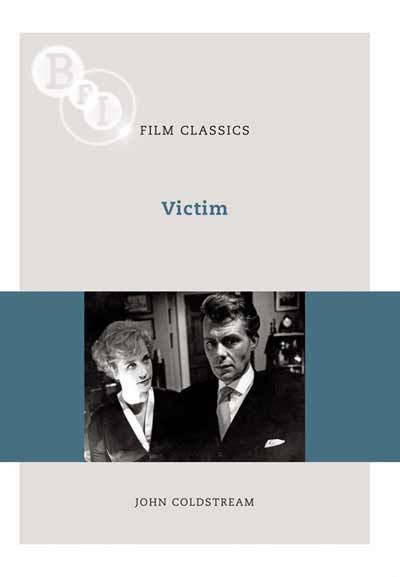