At the time it sometimes felt as if what had previously been a steady trickle of titles was threatening to become a flood, with filmmakers apparently trying to outdo one another in inventing ever more grotesque perversity, gruesome plot twists and gory carnage. Such movies still get made, of course, though mercifully the flow did abate somewhat – or perhaps it simply got diverted into books and television. Whatever, back then, serial killers suddenly felt very fashionable. Yet they’d been with us a very long time. Even those who seldom visited the cinema knew about Psycho (1960); and any self-respecting cinephile would probably have been able to list a handful of classics from Shadow of a Doubt (1943), Peeping Tom (1960) and Le Boucher (1970) to 10 Rillington Place (1970), The Boston Strangler (1968) and While the City Sleeps (1956).

That last title, made in 1956 by Fritz Lang and as withering in its depiction of a greedy, sensationalist press (plus ça change!) as it’s acutely aware of the psychological torment of the killer in question, brings to mind the same director’s M, made in 1931 and starring the great Peter Lorre as the child-killer Hans Beckert. Now you might argue that M was not the first great serial-killer movie – after all, it had been preceded not only by Alfred Hitchcock’s The Lodger (1926) but by Robert Wiene’s The Cabinet of Dr Caligari (1919). But in fact that’s a flimsy argument. Though based on a play inspired by the Jack the Ripper killings, Hitchcock’s film is actually centred on is-he-or-isn’t-he? suspense about a man who finally turns out not to be the murderer. And while Wiene’s expressionist classic does feature a series of killings, since they’re perpetrated by a somnambulist who’s being directed by a mesmerist it’s primarily concerned with questions of control and consciousness, sanity and responsibility.

Neither of these films, therefore, is about – in any full sense of the word – a serial killer. Lang’s M, however, most certainly is. Furthermore, it’s not only a piercingly astute psychological study of a man who suffers awful remorse for the crimes his uncontrollable urges force him to commit but also – and just as illuminatingly – an examination of how society might respond to the revelation that it is harbouring, somewhere, a child-killer.

Lang was an extraordinary filmmaker and his CV is littered with classics – the Mabuse films (1922, 1932, 1960), Metropolis (1927), Fury (1936), The Woman in the Window (1944), Scarlet Street (1945), The Big Heat (1953) and Beyond a Reasonable Doubt (1956) are merely the best known – but he himself regarded M, his first sound film, as his best, and it’s not hard to see why. Apart from anything else, it’s quite remarkable on a technical level: Lang’s highly inventive and sophisticated use of sound made it one of the most enduringly influential talkies, while the camerawork, by Fritz Arno Wagner, ensured that many of its images remain genuinely iconic. I dislike the excessive use or abuse of that word, but in the case of a missing child’s balloon stuck in telephone lines, or Beckert discovering an M (for ‘murderer’) chalked on his shoulder, or many other memorable scenes, nothing else will suffice.

More importantly, however, it’s the portrait of the killer and the society that produced him that is so extraordinary – and extraordinarily modern, even timeless. Lang – who co-wrote the script with his wife Thea von Harbou and whose research for the film included meeting a number of serial killers including the ‘Düsseldorf Vampire’ Peter Kürten – never shies away from the terrible nature or the equally terrible consequences of Beckert’s murders, but at the same time he refuses to demonise him: as played, brilliantly, by Peter Lorre, the killer is never less than human.

Likewise, by having both the Berlin police force and the city’s criminal underworld pursue Beckert, the film not only hints at the somewhat murky moral status of the world the culprit inhabits but points to the hypocrisy and hysteria that may turn righteous anger into an uncontrollable witch-hunt. Some have argued that Lang’s depiction of Berlin anticipates what happened in Germany over the next decade. Whether such a claim is correct, I cannot say. But is M’s portrayal of the world still relevant to us, here today? Oh yes; without a doubt.
Geoff Andrew, bfi.org.uk

Yes, the images: a shadow cutting across the poster that announces a reward for the child murderer; Peter Lorre’s bulging eyes when he discovers the chalk mark on his shoulder; a high-angle shot of a vacant street corner that coldly records the trapped suspect’s futile escape attempts; the disembodied hand of the Law that rescues him from the lynch mob. Yes, but also the sounds: the anguished calls for Elsie across silent images of the empty staircase; the neurotic off-screen whistling of a few bars from Grieg’s Peer Gynt; and, finally, Lorre’s voice – so different in accent, pitch, tone, rhythm and cadence from those around him.

Anyone who has seen Fritz Lang’s M even once will remember these images and sounds. They are etched indelibly in our mind; they circulate as (often ironic) citations in contemporary culture. Who hasn’t seen the commercial for MTV where the letters ‘TV’ have an ‘M’ slapped on them? Or the poster of M, the 1952 film noir remake, which adorns an office wall in The Player? Or Woody Allen’s homage to M in Shadow and Fog? Umberto Eco once called Casablanca a cult film because it is remembered and quoted in parts and fragments. In this sense, M has long been a cult film.

In his famous 1961 television interview, ‘Le Dinosaur and le Bébé’, Jean-Luc Godard asked Lang which of his 40 films he thought would last. Without skipping a beat, Lang replied: ‘M’. Godard agreed. No discussion, no other title given. In a 1995 survey of several hundred German film critics and scholars, M was voted the most important German film of all time. Current movie guides typically describe Lang’s film as an ‘acclaimed classic’ or a ‘masterpiece’.

M was not among Germany’s top ten features of 1931. The film received mixed reviews and generated only modest box-office returns. But it did trigger discussions beyond the confines of the movie theatre – more so than other films, as the trade papers proudly remarked. Today’s newspaper again abound with stories of serial killers, mass murderers, school shootings, ‘lone wolves’, stockbrokers running amok and veterans carrying the war into cities. Are killers naturally born? Or are they made? Recent Hollywood movies transform serial murder into mass entertainment. Why this fascination, this obsession with carnage, murder and mayhem? Lang’s M is implicated in these current questions, but responds to them by suggesting through its very form that something else entirely might be negotiated in these films – something that has to do with us, with our lives, our communities, our culture.
Extracted from M by Anton Kaes (BFI Film Classics, 2000).
Reproduced by kind permission of Bloomsbury Publishing. ©Anton Kaes

A new edition of M by Anton Kaes is available to buy from the BFI Shop: https://shop.bfi.org.uk/m-bfi-film-classics-paperback.html 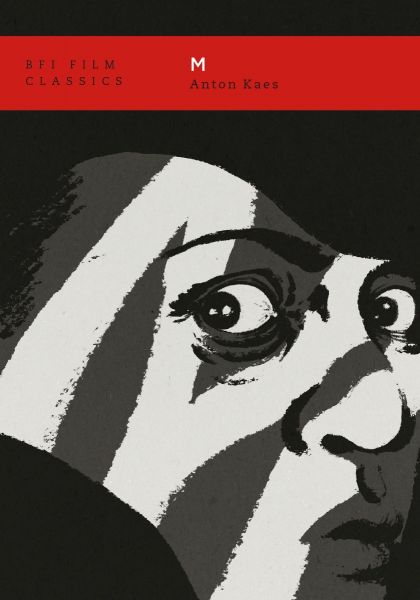