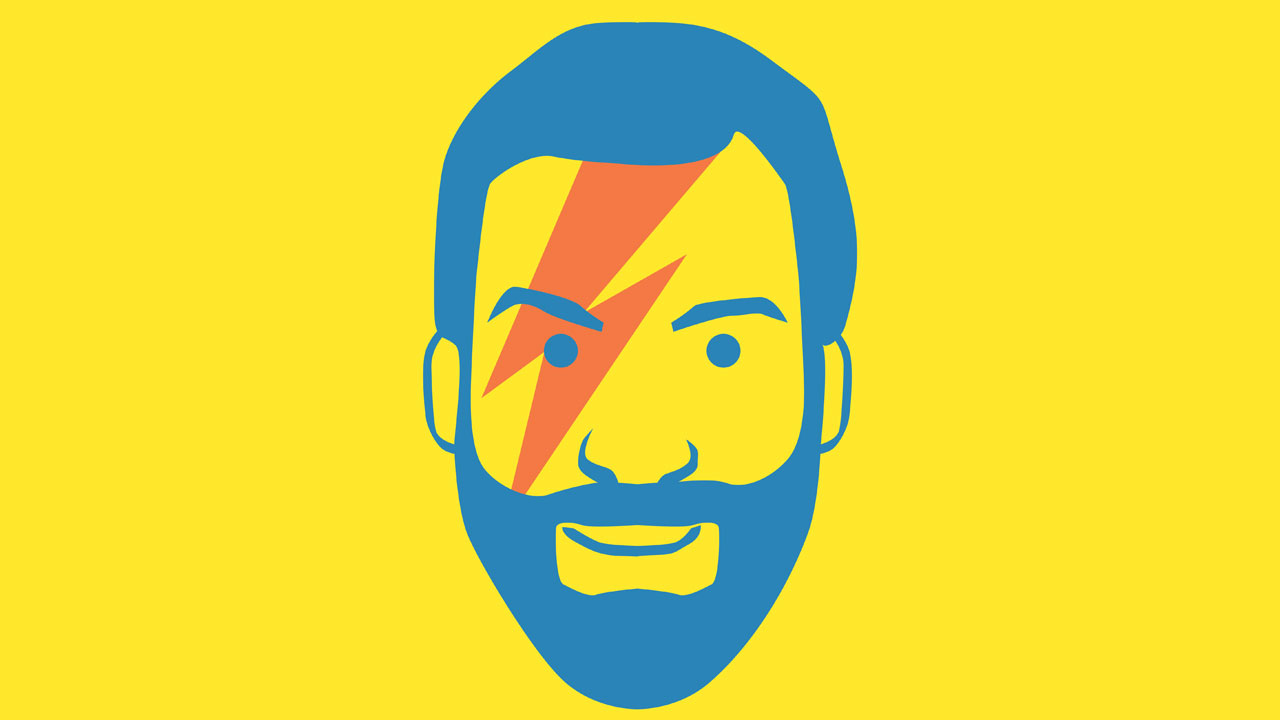 Welcome to a very special edition of BUG. We’re here to celebrate the life and work of David Bowie – giant of popular music, creative powerhouse, artistic and cultural pioneer, in sound and vision – on what would have been the eve of his 75th birthday. Of course, our reason for being here is to honour the memory of the man who was creating great work until the very end. And so, in true BUG fashion, our show will be a wide-ranging look at Bowie’s brilliance delivered with a healthy helping of irreverent humour – courtesy of our host Adam Buxton, whose own personal Bowie obsession extends to having made ‘David Bowie in the 1970s’ his specialist subject on Celebrity Mastermind.

We begin tonight’s show with one of the earliest Bowie videos. The Jean Genie, from 1972, was directed by the late Mick Rock, one of the greatest ever rock photographers, who established his reputation by working incessantly with Bowie during the Ziggy Stardust years. Bowie made a number of promotional films with Rock – for John, I’m Only Dancing, Space Oddity, Life on Mars, and The Jean Genie, which combines film shot of Bowie performing with the Spiders from Mars in a photographic studio, also performing live at a concert, and outside The Mars hotel in San Francisco. It’s a vibrant snapshot of Bowie as Ziggy at the peak of his powers.

In contrast, the video for Lazarus has been interpreted as including decidedly Bowie-esque clues about his imminent death. Lazarus is the work of Swedish director Johan Renck, who established a rapport with Bowie in the final months of his life. Lazarus continues ideas and imagery from the Blackstar video (also directed by Renck), but is a more contained portrait piece, with flashes of humour and, most importantly, Bowie himself gives his best on-camera performance in years, anguished at times, but also self-confident. And there is a brief glimpse of a grin that could come from the Ziggy days.

Our next section looks at a period in the late 70s, when Bowie formed a bond with one of the medium’s early masters: David Mallet. Mallet was a successful British TV director and producer, who started directing music videos in 1978, the same year he created The Kenny Everett Video Show as an irreverent rival to Top of the Pops. TKEVS’ music content blurred the lines between conventional studio performance and the emerging music video format. Bowie appeared on the programme in April ‘79 to perform Boys Keep Swinging, which led to Mallet being hired to direct the videos for that song and the following single D.J. From the album Lodger, both singles showed some of Bowie’s pre-Berlin swagger, and Mallet’s videos have similar energy, drama and wit. In Boys…, Bowie’s straight pop star act on TV show is subverted by three bored backing singers, all played by Bowie in full drag, based on old Hollywood stars Elizabeth Taylor, Joan Crawford and Marlene Dietrich – and all far more charismatic than the tame pop singer out front.

Having done so much to establish its creative potential in the late 70s, Bowie was keen to explore where music video could go in the 1980s. After the huge success of his Let’s Dance album, the follow-up, Tonight, released in ’84, featured videos that are intriguing not just to see Bowie adapting to becoming a mainstream artist for the first time, but also the lavish production values that music videos could afford at that time. Bowie co-directed Loving the Alien with David Mallet, which is an intriguing parade of images and sequences, with a strong flavour of surrealism: Bowie in blue-face with glowing teeth; as a groom in coat and tails with a Hindu bride on London wasteland; and performing with stone musicians on a Dalí-esque set.

In the summer of 1985, Bob Geldof approached Bowie to deliver something special for his Live Aid event, a global series of simultaneous concerts to raise funds for famine relief in Ethiopia. The initial idea was that Bowie would join forces with rock behemoth Mick Jagger to perform a track simultaneously from the London and New York venues. The chosen track was a version of Dancing in the Street. But the half-second satellite delay scuppered the plan for a live duet so the track was hurriedly recorded, along with a music video directed by David Mallet – the whole enterprise completed in just 13 hours. On the day of the concert, the video was introduced on stage by comedian Chevy Chase in New York, but many found the irreverent performances by both artists jarring. Almost 20 years later, in 2014, when Austrian videomaker Mario Weinerroither created his musicless version of the video, those playful performances gained a whole new audience. And, it was reported that Bowie was among those who found Weinerroither’s version hilarious.

Constant reinvention was, of course, at the core of Bowie’s artistic process. Adam himself has investigated this chameleon-like process, resulting in some interesting conclusions. He presented them on his 6Music tribute to Bowie in 2013, and soon after they were visualised by regular collaborator and animator-in-Lego Chris Salt. You will find out just how close Bowie came to replacing Ziggy with Cobbler Bob, in The Good Life on Mars.

That’s followed by the video that heralded Bowie’s entirely unexpected return to music after a decade’s silence, for Where Are We Now?, the first release from 2013’s The Next Day. Bowie also returned to an old collaborator to make this lo-fi video: multimedia artist Tony Oursler. Shot in Oursler’s Manhattan studio, it employs the artist’s trademark technique of beaming human faces on to inanimate objects – in this case David and artist (and Oursler’s wife) Jacqueline Humphries.

Then, we whizz back in time to 1983, when David Mallet and Bowie co-directed their most celebrated video. Ashes to Ashes was Bowie’s concept, which he meticulously storyboarded himself. It incorporated Bowie’s most iconic character created specifically for a music video – the Pierrot, referencing his dance/mime teacher Lindsay Kemp – and two other characters, an astronaut now crashed to Earth, and then chained into an Alien-style entity, and a prisoner in a padded cell. Bowie’s Pierrot is accompanied by a ‘chorus’ which he famously recruited on a visit to the Blitz nightclub in London, and included Steve Strange of Visage, walking slowly ahead of a bulldozer on the beach.

As with his music, Bowie made idiosyncratic choices as an actor, his on-screen career containing numerous and diverse highlights. His most iconic movie role was, almost certainly in Nicolas Roeg’s The Man Who Fell to Earth (1976) in which he plays Thomas Jerome Newton, the humanoid alien who comes to Earth to save his own planet and becomes cast adrift in New Mexico. He went on to win high praise for his performance as Jack Celliers in Nagisa Oshima’s WW2 drama set in a Japanese POW camp, Merry Christmas, Mr. Lawrence (1983). Later in the 80s, he would memorably assume the role of Jareth, king of the goblins, in Jim Henson’s Labyrinth.

After filming The Man Who Fell to Earth, Bowie moved back to Europe and started work on the albums which would become known as the Berlin Trilogy. The first of these, Low, introduced Brian Eno to the Bowie fold, on the production team with regular producer Tony Visconti. Bowie embraced Eno’s ongoing experiments with ambient music on Side Two of Low. Adam created his own short audio-drama, recreating the historic moment when Bowie joined Brian Eno and Tony Visconti in the studio to record Warszawa for the Low album, which has been visualised by the animating talents of The Brothers McLeod.

As we head towards the end of the show, we return to the collaboration that arguably produced Bowie’s most celebrated music videos. By 1983, David Mallet had directed or co-directed nearly all of Bowie’s videos for several years. In Australia, they shot the two videos for the first two singles from the album that would become his most successful, the Nile Rodgers-produced Let’s Dance. The video for the title track was shot in Sydney and a bar in Carinda, New South Wales, and the Warrumbungle National Park. Bowie performs and observes an Aboriginal couple’s struggles with Western cultural imperialism, with the red shoes mentioned in the song becoming emblematic. Bowie described this and the other video he and Mallet made for China Girl as ‘simple, very direct’ statements against racism and oppression.

In the final part of the show we return to the period in Bowie’s life referenced in Where Are We Now?, when he lived in Berlin in the mid to late 1970s. Bowie moved there after filming The Man Who Fell to Earth in 1975, ostensibly to escape his cocaine-heavy lifestyle in LA, and despite its own temptations Bowie restored himself in Berlin sufficiently to create three seminal albums: Low, Heroes and Lodger. The title track from the second album is one of his most iconic songs, and our presentation of Heroes is a unique composite of contemporary TV performances by Bowie with the original video, directed by ex-BBC man Stanley Dorfman.

And that’s our show. We’ll be back at BFI Southbank later in the year with some new BUG shows so keep an eye on our social channels for news about those.

Where Are We Now?
Director: Tony Oursler
Record company: Columbia US
US 2013

With thanks to: BFI Southbank
Post-production by: LEAP
Design Creative by: Limited Edition Design
Website by: Fabrik
Event Management by: Ballistic Events