Never do the years pass so sadly on screen as they do in Kenji Mizoguchi’s Sansho Dayu. In this period tragedy set in 11th-century Japan, the reunion of a kidnapped brother and sister with their heartbroken mother seems less and less likely with the escaping decades.

By the time of Sansho Dayu’s release, Mizoguchi was nearing the end of his career, but enjoying a newfound recognition among western critics. They’d discovered Japanese cinema via the triumph of Akira Kurosawa’s Rashomon at the 1951 Venice Film Festival, and found more pleasures yet in Mizoguchi’s film Ugetsu monogatari, which screened at Venice in 1953.

Though Mizoguchi interspersed these sweeping historical epics with a series of brilliant modern-day dramas, it was the exotic tragedies of Japan’s past that were snapped up by western distributors. For English-speaking critics, Sansho Dayu (known as Sansho the Bailiff in the US) confirmed the promise of Ugetsu monogatari that Mizoguchi was a master of visual storytelling, using flowing camera movements and telescoped years to craft tragedies of almost Shakespearian scope and gravity.

Sixty years have done nothing to diminish the emotional power of the film. It came in at number 59 in Sight & Sound’s most recent greatest films poll, and few movies have been written about so effusively. Critic Gilbert Adair called it ‘one of those ﬁlms for whose sake the cinema exists’, while New Yorker reviewer Anthony Lane wrote: ‘I have seen Sansho only once, a decade ago, emerging from the cinema a broken man but calm in my conviction that I had never seen anything better; I have not dared watch it again, reluctant to ruin the spell, but also because the human heart was not designed to weather such an ordeal.’
Samuel Wigley, bfi.org.uk, 15 May 2015

As we read our newsfeeds in the summer of 2019, Sansho Dayu is more relevant than ever. A mother on a dangerous journey to reunite with her exiled husband, her children forcibly taken from her, a callous government complicit in the disruption of her family – the drama at the heart of the film is re-enacted daily by federal officials on the southern border of the United States. There is some historical irony here. When Mizoguchi made Sansho Dayu in 1954 he set the story in an ancient era, far removed from the democratic reforms Japan had newly embraced under the American occupation. The fact that cruelty repeats itself comes as no surprise. What shocks us is the realisation that the current divider of families is the nation that taught the lessons of human rights to the post-war world.

Mizoguchi allegorised the displacements of the Second World War for a Japanese audience who understood themselves, rightly or wrongly, as the victims of militarism. Hardly a family that had survived the war was untouched by it. Fathers, sons and brothers were dead or missing, and those who did return were often absent emotionally forever after. Post-war viewers of Sansho Dayu would have had little difficulty identifying with a family removed in time but similarly broken under a corrupt regime. A deeper allegory may have touched them as well. The comfort women who were forced into sexual slavery by agents of the military in Japanese-occupied territories were no different from Tamaki, played by the most popular actress of her day, Kinuyo Tanaka. Though the issue may not have been prominent in the post-war press, it was a shameful and open secret of experience on the front. Recent trade tensions between Tokyo and Seoul are rooted in decades of disputes over compensation to forced labourers and comfort women. A resurgent neo-nationalism in both countries makes any resolution in the near future unlikely.

Mizoguchi denounced the wrongs of the Japanese military but also put forth the concept of human rights as another name for the Buddhist value of compassion. The film makes clear compassion is not a simple feeling of kindness or sympathy but the active motivation to alleviate the suffering of an unrelated other, without personal gain, and with some risk to oneself. It is an emotion that occurs in a cluster of American and Japanese films set in the Second World War or inspired by its aftermath. One of the earliest, Casablanca (Curtiz, 1942), defines compassionate masculinity in terms of the iconic tough guy Rick. The protagonist of Schindler’s List (Spielberg, 1993) is a similarly charismatic man of power in Nazi-occupied Poland before he sacrifices all to save the lives of Jews. Three post-war works by Kurosawa – Seven Samurai (1954), Ikiru (1952) and High and Low (1963) – centre on the consequences of the choice of compassion for high-status men. As in Sansho Dayu, the hero in each of these stories loses the very thing that matters most to him: the woman he loves, his money, his family, his identity, his position or his life. Compassion is controversial, philosopher Martha Nussbaum tells us, and as these works bring home, not for the faint of heart.

Mizoguchi’s legacy comes full circle in Kore-eda’s 2018 masterpiece Shoplifters (Nambiki kazoku), winner of the Cannes Film Festival Palme d’Or. Its French title is Une affaire de famille and asks the twin questions Mizoguchi posed over 60 years ago: What is a family? And is it jeopardised or strengthened by compassion for those outside it? Neither director has the answers but both share a fear similar to our own when we find ourselves riveted to the latest news of violence on our borders. The family is a microcosm of the nation, these films seem to say, and without governance based on an ethics of compassion, the threat is not outside us but within ourselves.
Foreword to the 2020 edition of Sansho Dayu (Dudley Andrew and Carole Cavanaugh, BFI Film Classics). Reproduced by kind permission of Bloomsbury Publishing. ©Dudley Andrew and Carole Cavanaugh

Sansho Dayu (new edition) by Dudley Andrew and Carole Cavanaugh is available to buy from the BFI Shop: https://shop.bfi.org.uk/sansho-dayu-sansho-the-bailiff-bfi-film-classics.html 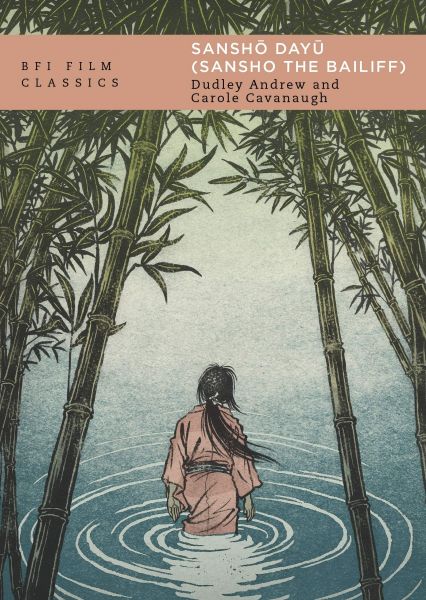 With special thanks to