Time magazine described Garland’s performance as ‘just about the finest one-woman show in modern movie history’ and it’s still hard to believe that she didn’t win the Best Actress Oscar® for it. Never had Garland given such a tour de force performance on screen, playing the nightclub singer who James Mason’s Norman Maine turns into a huge star. The film is an emotional ride, but oh so worth it.
bfi.org.uk

A contemporary review
Since Judy Garland temporarily deserted the screen, four years or so ago, some of us have been at times a little grudging about even the best musicals. Whatever they had, they hadn’t got Judy Garland; and, although Hollywood may have found singers or dancers more expert, no one has been able to match the high-strung vitality, the tensely gay personality that made Miss Garland such a uniquely stimulating performer. Against the odds – for it was surely inviting misfortune to take this tear-jerker of the ‘thirties and dress it up with songs and CinemaScope – her comeback picture proves the sort of personal triumph that helps to explain, and justify, the star system.

Fundamentally, A Star Is Born is an immaculate showcase for a prodigious, a not wholly expected talent. One expected the vivacity and the assurance with which the musical numbers are put across – but not, quite, the extra emotional edge that makes a song like ‘The Man That Got Away’ so electrifying. One expected that tremulous, catch-in-the-voice manner to prove adaptable to the demands of ‘straight’ acting – but not, quite, the jagged, vibrating intensity of the performance. If we are to believe that Vicki Lester (née Esther Blodgett) has that elusive, indefinable attribute of star quality, then the actress playing her must positively dazzle us with it. But the special fascination of Judy Garland’s playing is the way it somehow contrives to bypass technique: the control seems a little less than complete, and an emotion comes through, as it were, neat. In this incandescent performance, the actress seems to be playing on her nerves: she cannot but strike at ours.

The showcase itself has been constructed with precision tools. The story, basically, may be pretty tawdry stuff: the great actor, who is also a hopeless alcoholic, discovers a new star, marries her, and then, realising that he has destroyed his own career and is on the way to wrecking hers, walks quietly and despairingly into the sea. But Moss Hart’s intelligent and sure-footed script (based on the earlier version by Dorothy Parker, Alan Campbell and Robert Carson) takes every legitimate advantage of its keyed-up theatricality. And the picture of Hollywood, with the monstrously plausible publicity man (Jack Carson), the starlet making the most of her big occasion (Lucy Marlow), the flurried ladies of the publicity department, and the make-up men trying to outfit the new star with a Crawford mouth or a Dietrich eyebrow, is recorded with an incisive, astringent wit. The best films about Hollywood have never been kind; and in showing the pandemonium backstage at a big charity show, the jaded sophistication of Hollywood out to enjoy itself, or the feverish solemnity of an Oscar presentation ceremony, A Star Is Born goes a little beyond the conventional satire which laughs at the thing it loves.

Grandiose the film certainly is, notably in the whole idea of fitting musical numbers into this harsh and self-pitying account of the disintegration of one star and the rise of another. Not, of course, that the film is in the accepted sense kind of star, and, with this in mind, the producers have resisted a musical version: although the songs have been brought neatly enough into the story, they do not wholly become a part of it. Their logical justification is that they show Vicki Lester as a particular kind of star, and, with this in mind, the producers have resisted the lure of CinemaScope, the open invitation to pack those barren spaces with lavish sets and crowded chorus numbers. ‘Born in a Trunk’ ­– an unremarkable song, executed with wonderful feeling and command – leads into a sparkling survey of a born entertainer’s career, in which one cannot but conjecture that Judy Garland is giving us something of her own story. For this sequence, Irene Sharaff has designed sets and costumes as stylishly gay as they are simple and uncluttered. In the inventive burlesque of a big production number – an American in Paris, in China, in Cuba and practically everywhere else – Judy Garland clowns, capers and mimes for James Mason in their living-room. And the blues number, ‘The Man That Got Away,’ set in a dimly lit night club and ending with a shot so skilfully composed that it almost makes the CinemaScope screen seem defensible, is staged with an absence of apparatus that reflects a complete and, as it turns out a wholly justified confidence in the singer.

That the film holds together as it does, achieving so adroit a balance between songs and story, is a tribute to the skill of the director, George Cukor, and to his practised assurance at building a film around a personality. His good taste and good craftsmanship are here at their most unobtrusively distinguished, and he has met the problems of CinemaScope partly by employing a more mobile camera, sharper cutting, than we are used to, partly by taking advantage of the nature of the subject to bring off some sharply dramatic lighting effects, with a single figure spotlighted in the centre of a murky screen. Inevitably, it is in the scenes between James Mason and Judy Garland that CinemaScope proves something of a handicap: their playing builds up a sense of intimacy with which that outsize screen is continually at odds. Mason’s performance is finely calculated; he suggests both the decaying charm and the neurotic tension of the character, and his restrained playing steers a clear course through the pitfalls of a part full of opportunities for theatrical showiness or the cheap sentimental effect.

The version of A Star Is Born shown here, and widely in America, is some 30 minutes shorter than the original. One wouldn’t as a rule complain that a 150 minute film was too short, and even here there survive some passages towards the end which might advantageously be trimmed down. But the lost footage included, as well as two numbers, several early episodes designed to establish a character, to introduce Esther Blodgett, as it were, before the transition to Vicki Lester. The importance of these scenes is suggested by Bosley Crowther’s comment that the new version amounts almost to a different (and inferior) film. If this, though, is not quite the picture originally intended, it remains an extravagantly generous display of Hollywood showmanship as its most accomplished. Reverting to a tradition lately somewhat out of fashion, the film magnificently takes its tone from a star personality. And what a personality.
Penelope Houston, Sight and Sound, Spring 1955

Blackout II
Visit one of the oldest vintage shops in the heart of London.
@blackout2vintagefashion 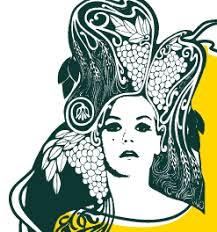