David Thomson on ‘The Big Sleep’

For decades now, since a Saturday in 1961 when I saw it three times in a row, coming out of one screening at the National Film Theatre’s original Hawks season and joining the queue for the next (as if the movie were a ride on a sensational fairground entertainment), I’ve regarded Howard Hawks’ The Big Sleep as my favourite film. Or, if not quite that, then the most entertaining, the most rich, confident and comfortable. It’s a picture you want to curl up in, like Bogart and Bacall in their tiny car, just looking at each other and practising kissing, while music and fate build up outside like a thunderstorm. It has always seemed to me, somehow, the happiest of films, so relaxed and yet so controlled: seeing it offers the chance of a rapture like that of being in love.

And I can hardly separate my good spirits from the steady spectacle – at full or three-quarters length – of the drably dressed Bogart carrying all before him: standing up to the heat of General Sternwood’s greenhouse; rallying at the net with Bacall; pushing Joe Brody in a circle until the creep cracks; plugging Canino; kissing Mrs Rutledge, and just generally looking so damn good and being so wry that you feel better about everything. It’s a dark world, and nearly every composition offers the shape of claustrophobia, if you want to feel gloomy. But Bogart handles himself and the space as deftly as Joe DiMaggio running left field. The space is like his shadow, or familiar.

Now here I am, years later, having volunteered to write something useful about the film. Will there be new kids who have never seen it before, and be as delighted as I was? I hope so. But, still, as I try to be useful, I have to notice how odd this happiness is, and how disguised a form it takes. Maybe that’s the first hint of Hawks’ unique perversity or indirectness. Ask him to make a film about happiness and he’d have gone fishing, or got drunk. But give him a story about more murders than anyone can keep up with, or explain, and somehow he made a paradise. Maybe he needed a cover, some way of seeming tough, cool and superior, if he was ever going to do happiness.

After all, in lots of ways The Big Sleep looks and feels like Fritz Lang, a man whose ‘happy’ scenes are about as encouraging as sweet breath in someone preparing to torture you. It is an interior film, without sunlight, fresh air or real nature. Though its compositions are not as intense, not as filled with convergent psychic toothache as Lang’s, still they are formal, orderly, enclosing and dictated by the specially designed sets. That any Hawks film feels more open or optimistic than any Lang picture isn’t merely in their different attitudes to composition. It’s more that Hawks is always looking at people, their gestures, their antics, their personality, with an eternally sad respect and fondness; whereas Lang sees shapes, against which the human figures are on the rack and pressured. Hawks’ approach was so anecdotal and so ready for surprise – but still he composed his shots like a man who shared Lang’s basic notion that there was no escaping fate. After all, The Big Sleep looks and sometimes feels like a film noir, which – clearly – is a mistaken or much less than adequate labelling of the movie.

Nevertheless, if you step back from the pleasure or the happiness, or whatever you elect to call it, you have to begin to see the ways in which Hawks has denied himself things that Raymond Chandler, say, appreciated. There is not one moment in the movie of The Big Sleep when proceedings get out into the potent open air of southern California or when the film sees the kind of thing Chandler noticed in his first sentence in 1939, the way in which ‘It was about eleven o’clock in the morning, mid October, with the sun not shining and a look of hard wet rain in the clearness of the foothills.’

It does rain in the movie, but this is the rain laid down on studio streets by sprinkler systems, the puddles placed like beauty spots, the lights arranged so that rain looks like the night’s negligee. Indeed, there are studious efforts to play fair by nature in the movie. When Marlowe goes bookstore hunting, there is an appealing air of some Los Angeles street, and yet it has no sky, no real threat of wildness, and so Marlowe strolls and drolls around, as elegant as Astaire. And when he goes up to Geiger’s house in the hills, there is a charming masquerade of hilliness, with a garden, inclines, trees and damp night air. So much care has been taken to avoid just going out and finding some pretty, sinister nook in those Hollywood hills that could be Laverne Terrace, Geiger’s place, and the kind of address you have to check out carefully to make sure it never existed in L.A. Looked at closely, the elaborate, craftsmanly exterior set is every bit as arranged as what Marlowe finds inside the Laverne Terrace cottage. And then later, much later, when Marlowe goes down to Realito – which, if you think about it, is a name to tease detectives and scholars – we get a lovely atmosphere of road, mist and a wayside garage. But it’s all a set, a moody gesture towards the little town Chandler dreamed up in orange grove country:

‘The groves thinned out and dropped away to the south and the road climbed and it was cold and to the north the black foothills crouched closer and sent a bitter wind whipping down their flanks. Then faintly out of the dark two yellow vapour lights glowed high up in the air and a neon sign between them said: “Welcome to Realito”.’

There’s no denying, or escaping, the serene momentum of the picture, its slippery ease. There isn’t a scene that doesn’t play. The mounting sexual tension between the two leads is heady, close to comic, yet very romantic, even if the prolonged double meanings of the horse-talk run a risk of being precious. The steady supply of new characters, or even bits, is life-enhancing: you feel the way Hawks cultivated those bits, if only to kid himself away from worrying about the fragile whole.

But the whole is ridiculous, and a commentary years later cannot simply ignore that, or make nifty jokes about it. For movies do have, or posit the chance of, a whole identity: Red River, Rio Bravo, Bringing Up Baby and His Girl Friday do have entirely coherent and developed plots about which we care and wonder. Those films are dramas; The Big Sleep is something else, a something we still need to puzzle over, for it is both radical and decadent as it relates to the history of the narrative movie.
Extracted from The Big Sleep by David Thomson (BFI Film Classics, 1997).
Reproduced by kind permission of Bloomsbury Publishing. ©David Thomson

The Big Sleep (new edition) by David Thomson is available to buy from the BFI Shop: https://shop.bfi.org.uk/the-big-sleep-bfi-film-classics-new-edition.html 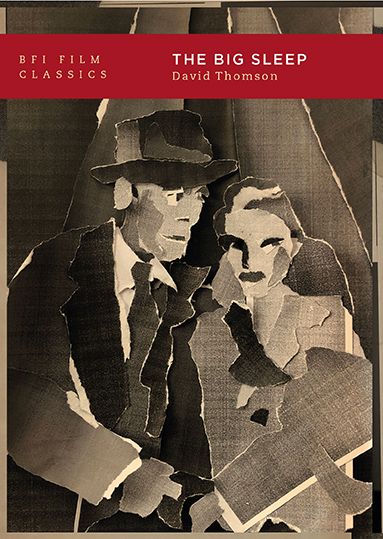